Learn Go in a Blinkt! with a Raspberry Pi and Docker

How I began my journey with Golang on a Raspberry Pi running Docker and had my first real world application working within the afternoon: a client for my connected display server. Follow me step by step along the way. 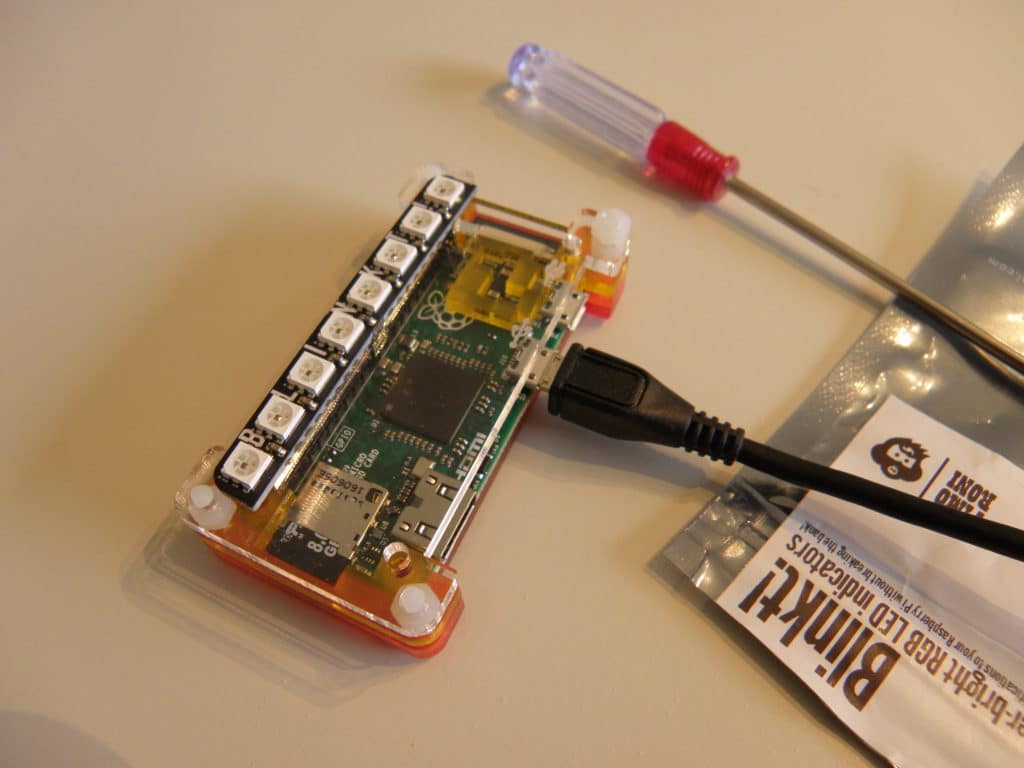 In a small form factor, that sits nicely on top of the GPIO Header, it provides Eight individually addressable RGB LEDs.
Cool thing: These LEDs do not interfer with the Pi sound output.

The manufacturer, @Pimoroni, provides a Python library with setup details on Github.

Go is a popular programming language created by Google. It’s a compiled, statically typed language that targets ease of use and adoption.
Go programs can be compiled and run on the Raspberry Pi, here are the pros :

The Blinkt! libraries have been ported to Go by @AlexEllisUK, so you can go straight ahead and use them in your projects!
> Star of Fork the Blinkt! Go Examples <

How easy is it really to try and learn Go?

I do know a few programming languages, but I never gave Go a try, yet.
Let’s take our Raspberry Pi for a walk, then!

As I didn’t want to fill up my base image with a bunch of files and dependencies, I used Docker to safely play and test in an isolated container.
curl -sSL get.docker.com | sh
usermod -aG docker pi

I cloned the example repo:
git clone https://github.com/alexellis/blinkt_go_examples.git
The ‘progress’ folder does have a sample Dockerfile, I used it as a starting point and built the Docker image
cd progress
docker build -t actuino/blinkt-go-dev-armhf:1 .

Note 1: I tagged the image with -t flag, so I was able to push it later with a ‘docker push’ command. You can now fetch this image without the need for building it with
docker pull actuino/blinkt-go-dev-armhf:1 No need then for the ‘git clone’ command nor ‘docker build’!
Note 2: I tested the Blinkt! on a Pi Zero. Nice toy, but not the best when it comes to CPU power. As the build took too much time, I simply build and pushed the image from a 4 cores Orange Pi Zero (took about 10 minutes) and then just pulled the image from the Pi Zero. 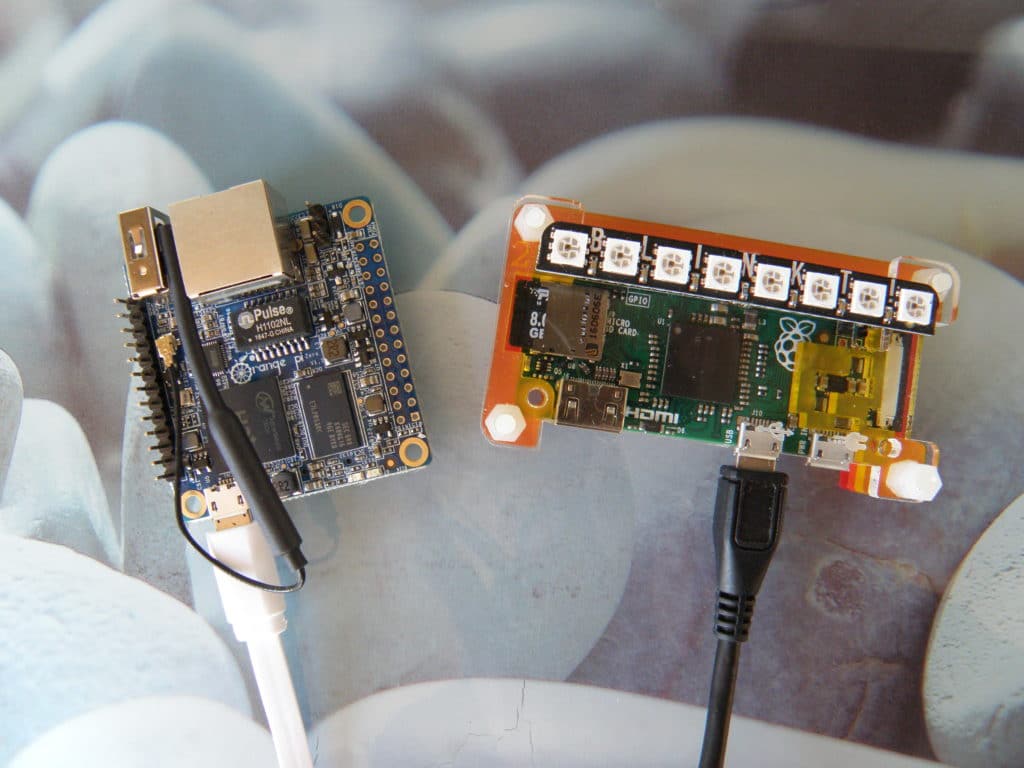 Side by side, an Orange Pi Zero and a Raspberry Pi Zero with the Blinkt!

It worked on the first try: a red light bouncing on the Blinkt!, Cool.

Let’s try to modify the app.go code, here’s what I did in a few minutes: 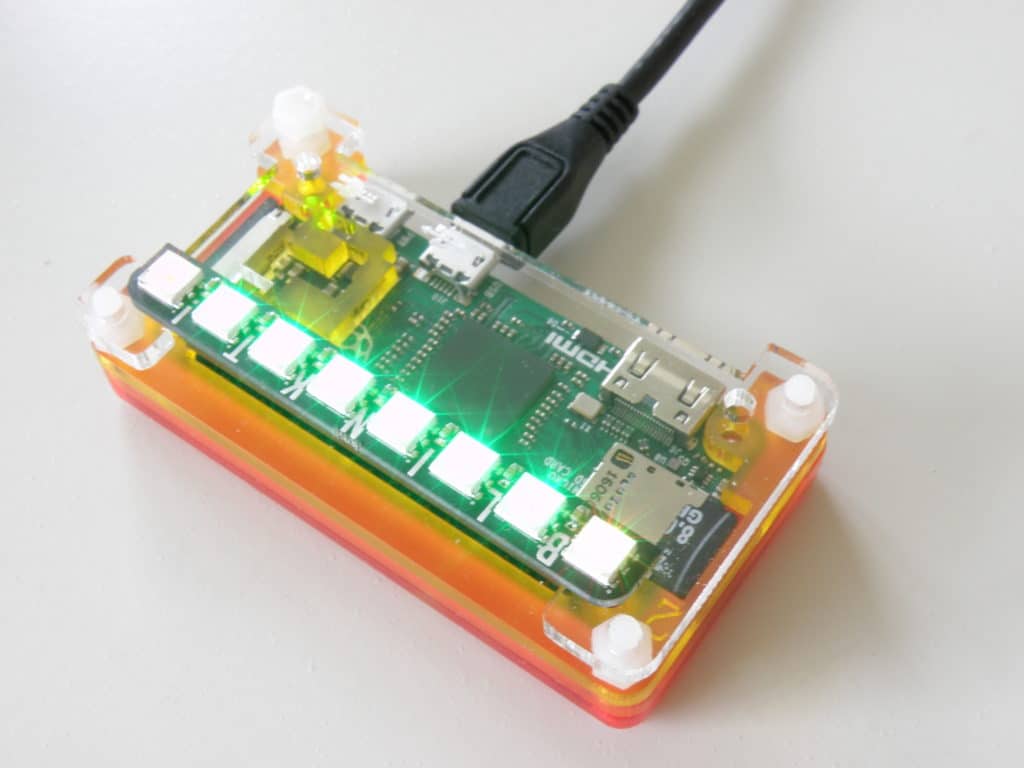 I simply edited the app.go code from the container itself.
For this, I had to run a shell instead of the default ‘progress’ app. That’s easy:

(I know it's nor pretty, efficient nor earth-breaking, I just tweaked a few lines and added a bunch of conditions to test)

See from behind a plastic diffuser: Catch the glowing worm!

Let's Go further, shall we?

Did I learn Go yet? Not so sure. Just a first contact, that went pretty well.
But I had another idea in mind. Remember the Minecraft experiment we did, and our 'Unicorn' display with a client and server?

The Unicorn Connected Display uses a 8x8 or 4x8 LED array. Why not 'extend' it to the Blinkt! 1x8?

I felt pretty optimistic. In fact, all I needed was a WebSocket client, some code to copy/paste, maybe a Stack Overflow tab and it'll be ok in a snap. Really? Was it so simple?

The quest for a Socket.Io client in Go

Our Unicorn server (NodeJS) relies on the Socket.Io WebSocket library.
A Google search showed several libraries of interest. I tested 2 good candidates with the display server.
Note: the Unicorn Server has a Raspberry Pi Docker image too, docker run -d -p 80:80 actuino/unicorn-server-armhf:1 so it was easy as Pi(e) to run and test against.

When importing a new library in a Go project, no need to fetch the code yourself: You just add the name of the library in the code, then run a go get -v -d and it'll fetch the code itself.
Then a simple go build (may take a few minutes) and you end up with an executable file named from your folder, that you can run or ship.

Once I got a working client prototype - thanks to the examples - it was just a matter of mashing up the display and client code.

Good news! The Unicorn Protocol I designed use simple Json data payload, and Json is well understood by Go, nice!

And yes, I had to use Stack Overflow and did a few copy/paste.

The final code is available on Github: Star and clone the code, then try it for yourself, Here is the readme with a step by step how to.

It took an afternoon to install, test, and play with Go on the Pi and to have a first (non trivial) program working.

We now have a lightweight connected RGB display that connects to a display server, and can be updated in real time from any source: it accepts WebSocket or HTTP Post, so virtually anything can pilot the display, including mobile app, web pages, IOT sensors...

Here are some practical applications we think of:

More about Go on the Raspberry Pi?

Check Alex's blog: he published several blog posts about Go, Docker, Testing in Go, including a tutorial to fetch Json from an API: a must read!

Next step for our code? Use Go Tickers and channels to enable smooth animated displays.

You can join the conversation and comment/upvote on reddit too.